G4S is the UK's biggest private security company, with its government contracts alone worth over £600 million. Responsible for security services, managing detention centres, prisons, and 675 court and police station holding cells, G4S have also just been granted the £100 million contract for providing 10,000 security guards for the upcoming olympics.
Whilst G4S still seem to be government favourites, their record is far from spotless. The firm lost their previous 'forcible deportation' contract last September after receiving 773 complaints of abuse – both verbal and physical. The final straw came with the death of Jimmy Mubenga in October 2010, an Angolan asylum seeker who died as a result of his forced deportation by G4S guards. Two of the guards are on bail facing criminal charges, whilst G4S is still waiting to hear whether they are to face corporate manslaughter charges.
Now, asylum seekers in Yorkshire and Humberside are expected to accept this multi-national, money-hungry, security company as their landlords.

Our local non-emergency ambulances proudly display their allegiances as they drive by.  The G4S logo trumps the NHS in the statement emblazoned on the sides ‘G4S working in partnership with the NHS’.  This partnership has resulted in the death of a double amputee when his unsecured wheelchair tipped over backwards as he was being transported to hospital in an ambulance operated by G4S.
The employees had not been properly trained.   Private firms have a history of saving on training and G4S certainly has form in this department.  Their ‘just in time’ procedures left many Olympic guards waiting to be trained two weeks before the Olympics.
So when I see the logo on the local ambulances I feel aggrieved.  I pay taxes for a National Health Service, accountable and transparent, not for a service run by what I believe is a serial violator of human rights and international law which stints on training, the better to profit from a public service.
Worth posting a few stickers on the ambulance when the chance occurs.

First time I visited the local hospital and spied the waiting ambulances it was fine.  The second time I was seen by the driver who proudly sports the G4S logo on his chest.  In true Ragged Trousered Philanthropist tradition, he shouted after me and shook his fist. My husband responded with a friendly wave and smile.  While my husband was waiting in the outpatients for me to complete my treatment, a furious driver and manager came in to berate him.  He was not intimidated and  very loudly, so that all in the outpatients could hear, he gave them a short expose of the company they were defending, including the fact that it had been responsible for the death of a patient through lack of staff training. The manager stated that they were not interested and if we were caught again we would be reported to the police for criminal damage.
So now we know.  The company is uninterested in its shortcomings and only worried that it will be publicly challenged.  The question arises as to who is guilty of criminality?

We apologise if you've been bombarded with messages about the Public Eye Awards, but you'll be glad to know that G4S have been voted the third worst company in the world! Even though we would have loved to see G4S topping the list, were pretty happy with G4S being given the bronze award considering the stiff competition from Goldman Sachs and Shell.

If you voted for G4S, you'll be pretty well-versed in the reasons for naming and shaming this toxic company. From securing the apartheid wall in Palestine to exploiting the UK "asylum market", G4S are playing a pivotal role in the securitisation and criminalisation of communities across the globe. Unsurprisingly, G4S were not too keen to hear of their nomination, and the company sent a 150 word letter to the Business and Human Rights Resource centre contesting the grounds of their nomination. Here's an excerpt from their defence:

The basis on which G4S has been nominated is inaccurate and very
misleading. Much of the information published as criteria for the
nomination is completely false, for example: it is not true that G4S staff
are “often badly trained and paid” or that “many have a criminal
record”. G4S staff do not “man checkpoints” or “manage prison
security” in Israel. Where the company does operate in complex
environments such as Iraq or Afghanistan, it often does so in support of
humanitarian programmes or on behalf of western governments helping
to resolve conflict or to provide a long term stable regime for the people
of the country.

There's no need to repeat the brilliant responses articulated by John Grayson and Adri Nieuwhof in their recent Open Democracy piece, but put simply, G4S' pithy 150 word complaint is hardly demonstrative of a company that values their public image. Whilst their bronze prize from the Public Eye Awards is a brilliant step towards exposing the activities of this multi-national company, it is not going to be enough to change current practice. Campaigners and activists across the globe will continue to highlight G4S' complicity in human rights abuses; we said no to G4S, and we still mean it.
Posted by Eggstatic at 06:55 1 comment:

As it's Sunday, here's a relatively light-hearted reason for you to vote for G4S as the worst corporation of 2012 . They've got a company anthem. They even had a video for this company anthem (although it was taken off YouTube promptly after the New Statesman ran a story on the song). And they are even rumoured to have a company flag. If you don't believe me, have a listen yourself:

If you found yourself wanting to sing along, here are the terrifying lyrics: 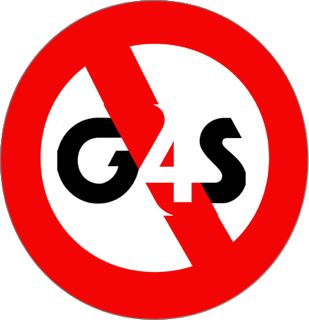 Making a difference is what you do
But consider all you have at stake
The time is now don't make a mistake
Because the enemy prowls, wanting to attack
But we're on the wall, we've got your back
So get out front and take the lead
And be the winner you were born to be
G4S! protecting the world
G4S! so dreams can unfurl
24/7 every night and day
A warrior stands ready so don't be afraid
G4S! secure in your world
G4S! let your dreams unfurl
We're guarding you with all our might
Keeping watch throughout the night

Posted by Eggstatic at 07:23 No comments:

As promised, throughout the month of January, we'll be recounting the reasons for you to vote for G4S as the worst company of 2012, and we'll probably be finding more.

Today, we're looking at their multi-million COMPASS contracts with the UK government.

The COMPASS contracts saw the provision of housing for asylum seekers in the UK completely privatised. The country was split into six multi-regional contract zones, and the provision of services was put up to tender. In March 2012, Serco, G4S and Clearel were revealed as new service providers, with G4S managing provision in Yorkshire, Humberside and the North-East and the Midlands.

Since taking over the management of asylum housing from local authorities, G4S and their chosen property providers have continued to provide sub-standard, unsafe housing for people seeking protection in the UK. For a small indicator of the level of service provided by this multi-million pound company, read John Grayson's account of a young mother's experience of G4S housing.
Posted by Eggstatic at 03:10 No comments:

It's 2013, and we're all looking ahead at the new year. But it's not quite time to forget about what happened in 2012. The Public Eye Awards, run by Greenpeace Switzerland and the Berne Declaration, has opened the online voting for 2012's worst company. Hardly to our surprise, G4S is one of them.

The whole procedure is aimed to help campaigners hold the most culpable companies, those at the heart of human rights and environmental abuses across the globe, to account. If you still need a reminder of why G4S deserve this honourable title of the worst company of the year, this video clip will hopefully trigger some memories:

Far from just providing abominable asylum housing in Yorkshire and Humberside, securing Israeli apartheid and even targeting 'high-risk areas' of conflict and war as emerging markets, the tentacles of G4S' subsidiary companies are steadily creeping around the globe. Your vote can help bring this murky outsourcing giant into the critical spotlight it deserves.

Over the next few weeks, we'll be providing you with a new reason every day to name and shame G4S as the worst company as 2012. It's time to hold this corporate giant to account.

As they say every new year, out with the old ...

Activists from various anti-G4S campaigns are coming together for a UK-wide gathering in Sheffield on Saturday 6th October. Individuals and campaign groups are invited to attend to share, network, strategise and plan how to build an even more effective Stop G4S campaign. The gathering is open to all who oppose G4S and want to work with others to Stop G4S from taking over public services for private profit while violating human rights.

Despite its track record of complicity in human rights abuses in the UK and abroad, G4S is being handed control of public services - everything from policing to “asylum markets” to the welfare system. Even after the Olympics débâcle, G4S looks set to take over even more control of our communities.

Campaigns have begun to highlight the appalling record of G4S and to work to prevent it from putting profit before human rights and dignity. From local campaigns to pressure G4S as it cuts corners, to demonstrations targeting the company’s AGM and headquarters, we’re beginning to damage the G4S brand.

The gathering will launch the UK 'StopG4S' campaign coalition, bringing together grassroots campaigns, networks and organisations with the aim of providing support, resources, guidance and skill-sharing. This coalition will be inclusive and non-hierarchical.

Please respond to: stop-g4s@riseup.net to reserve a place, find out more or to request a speaker to attend a meeting to discuss campaign plans. If you or your organisation (if you have one) wish to endorse this call please let us know. Facebook event

Reasonable travel costs may be paid to those unable to fund themselves. Overnight accommodation will be provided by local activists.

The many reasons to Stop G4S:

G4S and Israel’s occupation of Palestine:


Selection of actions taken so far:

UK Police forces to consider G4S despite Olympic failure, Reuters, 23rd August 2012: Despite failing to provide sufficient security staff at the Olympic Games, G4S remain a key player in the outsourcing of police services. the Bedfordshire, Cambridgeshire and Hertfordshire forces' joint working group has decided to continue co-operation with the multinational security company. (Also covered by the Independent on the 24th August).

Homes for asylum-seekers present new crisis for G4S, The Independent, 25th August 2012: G4S' subcontractors have until the 2nd November to find new homes for 1,200 asylum seekers now being housed in Yorkshire and Humberside. Transition moves were meant to take place from June onwards, but most people still haven't moved yet.

G4S leaves refugees in limbo, Inside Housing, 28th August 2012: Inside Housing covers the fact that hundreds of asylum seekers face uncertain futures because a private company (G4S) is struggling to find suitable housing.

G4S confirm £50m hit on Olympics security contract, The Guardian, 29th August 2012: G4S reported pre-tax profits of £61m for the first half, down from £151m in the first six months of 2011, with the drop in profits accounted for by the Olympic security fiasco. Further coverage found in pretty much all newspapers, with Nick Buckles claiming that he needs to restore investor and shareholder faith in the company.
Posted by Eggstatic at 08:36 2 comments:

“Housed asylum seekers are all fleeing from persecution and in the process of applying or appealing cases for sanctuary. They are not 'criminals' who deserve prison guards as their landlords but families and individuals claiming their rights under international treaties signed by the UK on our behalf.” Jon Grayson & SYMAAG